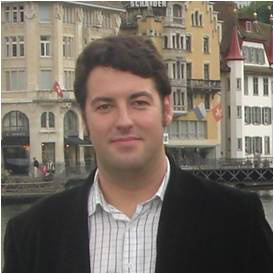 From March 2003 to January 2005, he was a postdoctoral researcher at the Lawrence Berkeley National Laboratory (USA). The research activity was supervised and financed by Prof. Carlos Bustamante and Prof. Alex Zettl, from University of California, Berkeley. His post-doctoral research was the development of ultra sharp atomic force microscope tips based in carbon nanotubes. The main objective of this research was to improve the resolution in the image acquisition of biological systems (DNA, molecules).

In 2005, he starts as a Juan de la Cierva researcher at the Instituto de Microelectronica de Madrid (CSIC). He joined the group of Prof. Ricardo García for learning nanolithography techniques by AFM. To complete his technical formation, in 2006 he spend three months of postdoctoral stage at the National Research Council of Italy, in Bologna. Under the supervision of Prof. Fabio Biscarini, head of the department of the Intitute for Nanostructured Materials, he learned microcontact printing technology and others soft lithography techniques.

Back at the Instituto de Microelectronica de Madrid, he developed a new prototype of parallel nano-oxidation machine. This prototype can perform oxidation motives of a few nanometers along large areas of mm2 in less than a minute.  Also, the strong background obtained in AFM and microelectronic techniques has led him to create silicon nanowire transistors with channels of few nanometers. The silicon nanowire transistors can be used as sensors for molecular recognition at the nanoscale. This technology was patented with the MIT (US Patent 8,154,063)

In April 2011 he moved to the Technical University of Madrid as a professor I3 in the Institute of Optoelectronic Systems and Microtechnology (ISOM). His research interest is focus in the development of nanoelectronic devices fabricated with graphene for energy applications.  This technology has led to another patent with the MIT and the creation of an Spin off company.Since 2013 has been the coordinator of several National research programs about graphene energy devices and also the Coordinator of the ISOM node in the Spanish Network of Clean Rooms (ICTS Micronanofabs). In June 2019 has been elected as the Vice Principal of the Institute of Optoelectronic Systems and Microtechnology at the Technical University of Madrid.